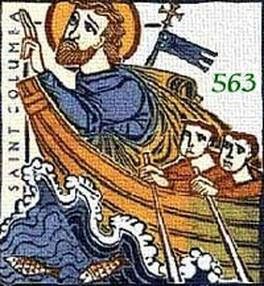 Christianity spread into England and Wales as part of the Roman empire, becoming widespread by the middle of the 4th century, continuing westwards into Ireland with traders and organised missionaries such as Palladius and Patrick. However, whilst Ireland had a relatively stable political system, allowing Christianity to grow and flourish, the situation in England deterioriated with the arrival of pagan Anglo-Saxons in the early 5th century and political upheavals and instability for about 100 years. Irish missionaries such as Colmcille (Columba) brought Christianity to the Dál Riada and Pictish Kingdoms in Scotland from the mid-6th century (based out of Iona) as well as Ciarán (Pirin) to Cornwall in the 5th century. From 597, Christianity was re-introduced to England by missionaries sent by Pope Gregory in Rome, including Augustine of Canterbury and into Northumbria by the Irish bishop Aedán (Aidan) of Lindisfarne. 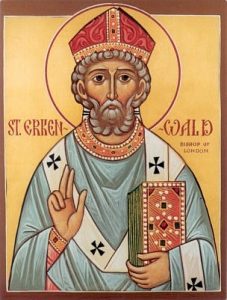 Seventy years after Augustine’s mission, in the year 666, Frithuwald, sub-king of Surrey and likely a nephew of King Wulfhere of Mercia, granted lands to Erkenwald, a Christian nobleman from Lindsey in Lincolnshire, to establish a Benedictine Abbey at Chertsey, dedicated to St. Peter, with Erkenwald becoming its first Abbot. Erkenwald also established an Abbey at Barking for his sister, Æthelburgh who became Abess. He became Bishop of London in 675, and became an advisor to the royal court of Wessex. He died in 693 and was buried in Old St Paul’s Cathedral in London. 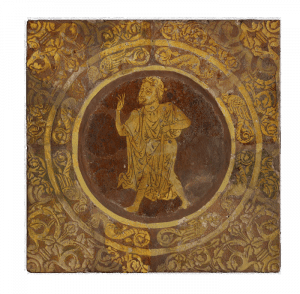 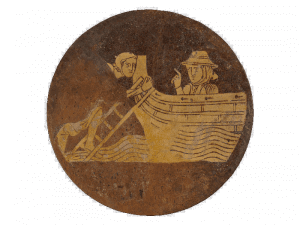 The Abbey at Chertsey flourished until the Danish “Great Heathen Army” invaded England in 865 and swept westwards to attack Wessex from 870, sacking and burning Chertsey Abbey and slaughtering ninety monks including the Abbot Beocca and priest, Hethor between the years 871-875. The Abbey was rebuilt, as it is recorded that by 959 in was greatly in need of repair and Bishop Aetheldwold of Winchester ordered works to be done, and, in 964, King Edgar ordered that monks from Abingdon take over the Abbey. The Abbey was again rebuilt in 1110 when work was commenced on “the new minster at Chertsey” – in addition the Abbey River was dug as a loop of the Thames. The Abbey (and town) caught fire in 1235. Following the fire, the repairs included installation of a tiled pavement, considered to be the finest encaustic tiles ever made in England. 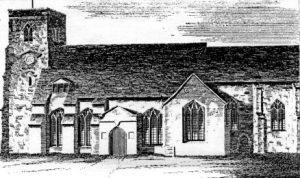 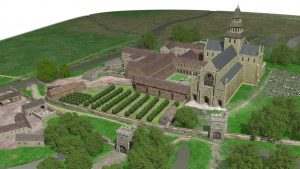 There is a record of funds being allocated for a Vicar in Chertsey in the late 13th Century, but is is likely that Abbot John de Rutherwyk (1307-1346) had a major role in building the current parish church, then known as All Saints; the first named Vicar is Thomas Le Gayte in March 1310.

King Henry VI was buried in Chertsey Abbey following his murder at the Tower of London in May 1471 and later exhumed and reburied in St George’s Chapel, Windsor in August 1484.

With the Reformation, Chertsey Abbey was dissolved on 6th July 1537 with Abbot John Corderoy and the remaining monks being transferred to Bisham and subsequently pensioned off six months later. The Abbey was demolished with the stone being used to build Oatlands Palace, improve Hampton Court, and raise the roads in Chertsey which were prone to flooding from the Thames and the Water of Redewynde (Bourne). The parish church was reconsecrated as St. Peter’s Church at this time and by the late 16th century had five bells, some from the Abbey, installed in it’s tower.

St. Peter’s church survived largely unchanged, however by the end of the 18th Century, the nave had fallen into disrepair, so between 1806-1810 it was pulled down and rebuilt in its current form. With the rebuilding, the tower and chancel were retained and strengthened by being partially enclosed, the height of the tower also being increased. There were six bells at this time and these were augmented to eight in 1859 and the floor of the church was also raised and pews installed to replace the earlier seating.

Since then, apart from internal redorations and repairs, the church building has not been significantly altered. It is worth noting the beautiful medieval roof in the chancel, the east end of which rests on the head of an effigy of a cleric (possibly Abbot John de Rutherwyk) and the Chertsey Abbey Curfew bell from 1380 which remains in the tower. 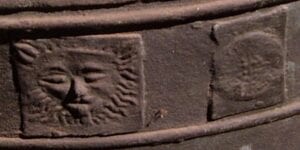 We use cookies on our website to give you the most relevant experience by remembering your preferences and repeat visits. By clicking “Accept All”, you consent to the use of ALL the cookies. However, you may visit "Cookie Settings" to provide a controlled consent. Read More.
Cookie SettingsAccept All
Manage consent

This website uses cookies to improve your experience while you navigate through the website. Out of these, the cookies that are categorized as necessary are stored on your browser as they are essential for the working of basic functionalities of the website. We also use third-party cookies that help us analyze and understand how you use this website. These cookies will be stored in your browser only with your consent. You also have the option to opt-out of these cookies. But opting out of some of these cookies may affect your browsing experience.
Necessary Always Enabled
Necessary cookies are absolutely essential for the website to function properly. These cookies ensure basic functionalities and security features of the website, anonymously.
Functional
Functional cookies help to perform certain functionalities like sharing the content of the website on social media platforms, collect feedbacks, and other third-party features.
Performance
Performance cookies are used to understand and analyze the key performance indexes of the website which helps in delivering a better user experience for the visitors.
Analytics
Analytical cookies are used to understand how visitors interact with the website. These cookies help provide information on metrics the number of visitors, bounce rate, traffic source, etc.
Advertisement
Advertisement cookies are used to provide visitors with relevant ads and marketing campaigns. These cookies track visitors across websites and collect information to provide customized ads.
Others
Other uncategorized cookies are those that are being analyzed and have not been classified into a category as yet.
SAVE & ACCEPT